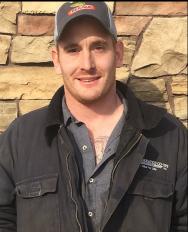 Federated Coops is fortunate to have some of the best employees in the industry.  Our attitude of service and focus on others is one of the core attributes which make our organization stand out from the rest. Nate Vrudny exemplifies such attributes.

Nate grew up in Finlayson, Minnesota and Graduated from Hinckley High School. Shortly after graduation, Nate joined the Army National Guard.  After spending time in boot camp and completing his Advanced Individual Training (AIT), Nate was deployed overseas with the Duluth 312th Engineering Company, where he served as a heavy equipment operator, supporting key military operations in Iraq.  Upon completion of his tour, Nate returned to Minnesota, where he worked in the construction industry until he joined the Federated Co-ops Agronomy team in Rush City, MN.  Nate recalls his decision to join Federated: “I wanted to stop traveling and was looking for a steady, stable place to grow my career.  So, when I interviewed and realized the organization would build my skills and grow my capabilities, I took the job immediately.”  After nearly two years at Federated, Nate completed his applicator certifications and worked as a full-time Agronomy applicator.

When asked about his role and career with Federated Co-ops, Nate replied, “I love my job. My favorite part of this role is the people I get to work with every day.  We support each other and do things that really make a difference.” Nate says, “I think about my job like I think about the military.  It’s about working as a team and doing things for others. We don’t do this for us, we do this for others.”

Nate mobilized for his second tour with the 312th Engineering Company in February at Fort McCoy for leadership training; after which, he mobilized with 170 of his fellow reservists for deployment to Kuwait, Jordan, Afghanistan and Iraq.

Visit our website for updates and information on how to support Nate until he returns.