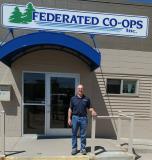 “Family, Faith and Federated” those are the 3 constants of Jim Barthel’s life.  And as we celebrate his 40 years of service, and hear his story, it is very clear how true that really is.

Jim started out working with his brother on his farm, after college.  He went to college at Anoka tech and graduated from the Agricultural program in the spring of 1976.  In January of 1977, in preparation of family life, since he was getting married in February, Jim needed a job and that is when he started at the Co-op.  At the time it was Wright County Co-Op.  Jim was hired on at the Albertville plant as a Plant Operator.  As of July 1977 Jim’s role changed to Plant Manager.  Not only is Jim celebrating 40 years working at Federated Co-Ops but he also celebrated 40 years of marriage to his wife, Dawn on the 19th of February!  Congratulations, Jim!!!

Jim was asked what his most memorable experience at Federated has been. There is no year, event or job done that sticks out. ” Just being successful and something to be proud of.”  Jim stated, “Everybody has different strengths, it’s a team deal and I love being a part of the team, it’s invigorating!”

A few fun facts about Jim:

Jim does not like surprises.  He is more of a planner. Jim enjoys taking road trips with his wife, such as; their recent trip to Phoenix.  Some day in the future they would like to do more of their road trips including take a 2 week trip, one week exploring the “four corners” [Arizona, Utah, Colorado and Nevada] and one week exploring further into Arizona where it’s warmer. Jim also enjoys gardening, fishing and his alone time. In addition to all of these, Jim really enjoys spending time with his grandkids!

Reflecting on some guidance Jim received when he was starting out, from Tim Kavanaugh, (former GM) Jim’s advice to the new generations coming in to the workforce at Federated, “Listen to what your patrons are saying.  Be honest, when you get backed into a corner, just go with the truth.  You should be able to hang your hat on that.  Most people understand, if you are honest with them.”  Great advice, Jim!

We are lucky to have you a part of the Federated team, Jim!  Thank you for all your hard work and dedication. Happy 40 years!