News > Agronomy News and Events > Weeds Compete for the Gold

Weeds Compete for the Gold 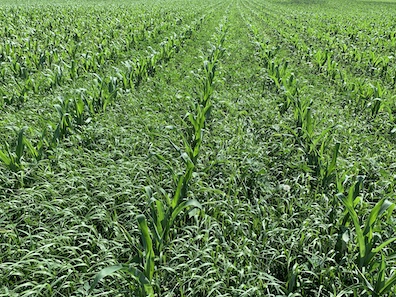 Talk of upcoming Olympic competition is a good reminder that your farm has some important competition to watch: the weeds vs. the corn crop.

Weeds compete for the same gold that crops race toward: sun, water, and nutrients. Thus, “if you reduce the competition [from weeds],” said Rod Gustafson, Federated agronomist at the Albertville location, “the crop can get all three and meet its yield potential.” And yield is the “gold” of crop production.

Pre-emerge herbicides help the corn crop beat out the competition from weeds early in the game. Without a healthy dose of weed control, corn grows taller not deeper, and it’s strong, healthy roots that support better and more efficient grain fill later in the season. If the corn is too busy growing tall, competing for sunshine that weeds steal, the corn roots suffer – and so do yields.

Relatively small, two-inch weeds in corn can cut yields by 6%. Which means: Plus, those weeds consume expensive nitrogen and sulfur! “Don’t feed the weeds,” said Gustafson.

Just because you “were able to kill the weeds in the past with post-emerge,” said Gustafson, doesn’t mean you will have that same success this year. Weather plus other environmental and time factors can get in the way, and the weeds will win. Trying to save money on inputs by avoiding pre-emerge herbicide applications is counterproductive.

Of course, a pre-emerge is only one part in a strong weed control program, Gustafson noted. “It’s not a guarantee that you won’t have to go out there again,” with a post-emerge herbicide. However, “if you put down a good foundation with your pre-emerge [application],” he said, “it’s going to take pressure off that second application … if you don’t put anything down early, every weed in that field is going to come up.”

“Just plan on a two-pass approach,” said Gustafson. “With higher commodity prices on corn, you don’t want to lose yield to weed competition.”

Talk to your Federated Agronomist soon to get your pre-emerge herbicide plans (and product orders) in place and go for the gold!

Sep 27,2022
Fall fertilizer is like doing the Hokey Pokey: What you get out is relative to what you put in.
Sep 27,2022
Fall applications of ag lime give soils the time to react and set the stage for spring planting.
Sep 27,2022
It's not too early to think about next year's seeds. The Discovery Plot events showcased new options to consider, including seed with limited production.