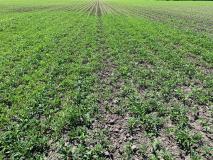 As more weeds become resistant to herbicides, it’s imperative to start weed control early. Weeds that compete with the crop can quickly cut into yields. Federated’s geography is not immune to some extremely difficult weeds (see video below).

Here are Federated’s top five weeds to watch for – and control – according to Kevin Carlson, Federated’s agronomy sales manager:

Volunteer corn is another top concern since it acts like a weed, overpowering both soybeans and corn, and causing deductions at the point of sale (i.e., when corn grain is in the soybean grain). No-till growers likely have other troublesome weeds, such as marestail.

Note that the biggest weed issues are broadleaves. “Grasses in our Round-up Ready® crops have tended to disappear in our crops (other than late-coming grass before the crop canopies, especially if it’s dry).

Weed control needs to be designed to fight these challenging weeds. “We can help with Mitigate® Plus – with Yieldburst™ Technology – tank mixed at 8 fl. oz./ac. with Enlist®,” said Carlson. By triggering the plant’s natural abilities, Mitigate Plus helps reduce stress from other tank mix partners, too, such as Round-up and Liberty®.

Versamax® AC is another tank mix partner, at 1-2 qt./ac., that helps boost energy and nutrition for the crop.

Talk to your Federated Agronomist to determine your best weed control options.