News > Agronomy News and Events > There’s Wisdom in the Precision

There’s Wisdom in the Precision 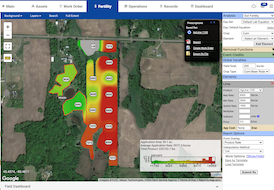 There are few guarantees in farming, but it is possible to wisely invest in crop inputs that lead to better yields and stronger return on investment. Precision, variable rate (VR) fertilizer application is one of those wise choices.

With grid and/or zone soil sampling, along with the help of Federated’s new FieldAlytics™ precision ag software system, it’s possible to see exactly where nutrients are needed in a field. As Mike Slater, Federated agronomy sales rep at the Isanti location said, “The right nutrient at the right place at the right time” helps crop yields improve, and “it’s good stewardship, too” since you aren’t overapplying [fertilizer] in areas that don’t need it.

The value of VR fertilizer applications is especially beneficial with potash, DAP, and lime. Making “wise” VR applications “spreads out the cost of fertilizer more evenly, reducing costs,” said Slater. With VR application, fertilizer gets applied at appropriate rates in the places it’s needed, and not where the soil nutrients are already sufficient.

Another FieldAlytics map showed a similar concept with potash; what would have traditionally (non-VR) been applied as a 200 lb./ac. flat rate instead averaged 186 lb./ac. by applying less in areas that didn’t need it and moving the excess to areas that did.

Field production levels and both field and soil management play into the soil health of any given field. And while cost savings are not guaranteed, VR fertilizer applications provide significant crop and soil benefits.

VR applications are possible with either grid or zone soil sampling and field mapping with FieldAlytics. Your Federated Agronomist is ready to help you steward input costs and improve yield potential with a custom-designed precision ag plan for your farm.