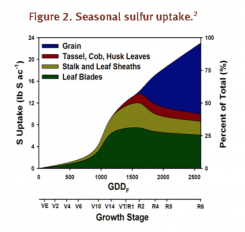 Clean air and “glacier-tilled” soils make eastern Minnesota and western Wisconsin appealing for life and farming, but that winning combination is a loser when it comes to one key macronutrient: sulfur (S). Corn, small grains, and even soybeans need sulfur more today than ever.

Kevin Carlson, Federated’s agronomy sales manager, said, “Sulfur is becoming more important every year because there is less available from atmospheric deposition” (that is, there’s less air pollution dropping sS on the ground). It has been said that there is less than one-fourth the amount of S in the atmosphere now as compared to a decade ago. (See Sulfur Facts.)

Additionally, crop yields are higher than ever, and with few growers using livestock rotation to get high-sulfur manure into their soils, S is often greatly depleted and not adequately replaced.

“There is an inverse relationship between crop demand and free sulfur,” said Carlson. The greater the crop yields, the less sulfur available to plants. “As yields trend higher – particularly on corn, but with small grains and even soybeans too, we are seeing greater sulfur recommendations,” he added.

When sulfur recommendations start to hit the rich sulfur-releasing prairie soils of western and southern Minnesota, it’s a given that the soils in Federated’s service areas will need even more. “Our organic matter is low,” said Carlson, and that means S is too.

With organic matter of 2-2.5% or less, said Carlson, “we stick to the sulfur guidelines.” When organic matter is higher (2.5-4%), “mineralization comes into play, and it’s a moving target” and sulfur recommendations are more difficult.

And for soybeans, “depending on the yield goal, organic matter, and what has been done in the past,” said Carlson, a minimum of 15 lbs./yr. of S should be applied. “We have seen that soybeans are responsive at those levels,” he added.

“Federated has many sulfur sources [all of which are sulfate sulfur] available with commercial fertilizer,” said Carlson. The choice depends what release rate is needed.

For growers with lighter soils who “do not need nitrogen but do need magnesium and potassium, KMag is a natural fit and a better buy [to meet sulfur recommendations],” said Carlson.

“Interpreting nutrient requirements and recommendations are important to get the most value for the money in fertilizer,” said Carlson. “We have a lot of different sulfur [and other fertilizer] products available.” Your Federated Agronomists are ready to help you manage your “big investment” in fertilizer.