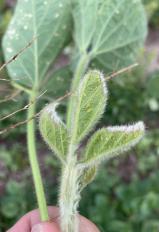 “We are starting to see higher concentrations of aphids on soybeans,” said Kevin Carlson, Federated’s agronomy sales manager, and “we are seeing [those concentrations] on seeds that were not treated with insecticide.”

As temperatures rise it is not uncommon to see aphids in soybeans, both treated and untreated, but the untreated seed is showing its vulnerability early on.

The number of aphids is not significant enough to require treatment – yet. But “keep an eye on fields,” said Carlson. Scout for aphids in soybeans, and alfalfa. “We are entering that insect time of year, and it’s early, especially for aphids.”

The potato leaf hoppers are showing up on alfalfa, which is also common in hot weather. “Leafhoppers are a significant problem in some [Federated] areas,” said Carlson, “in new seeding especially, but also in established fields.” The University of Wisconsin provides recommendations on thresholds for treating leaf hoppers. Typically, the threshold can be as low as one hopper per sweep, on average.

“Really watch those sentinel fields, especially those fields with untreated seed,” said Carlson. But as the residual effects of seed treatment wear off in the later part of the season, aphids can quickly reach treatable levels in any soybean field.

If you have questions, give your Federated Agronomist a call. And keep on scouting!

May 23,2022
Biostimulants with YieldBurst® technology provide additional energy to the plant through amino acids that give plant growth a boost and help mitigate the effects of crop stress from weather, insects, or disease.
May 23,2022
In this compressed planting season, don’t lose sight of your weed control plan for your soybean fields. Stick with a plan for a pre-emerge herbicide.
May 09,2022
Planting is full speed ahead, and adjustable crop plans, clear communication, and good notetaking can make a big difference in how the season progresses.