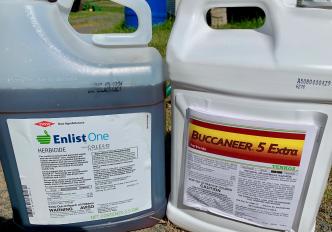 As soybeans reach and surpass the R2 stage, “that’s the end of the label for many herbicides,” said Kevin Carlson, Federated’s agronomy sales manager. And thus, if weed control hasn’t worked effectively, growers are out of options.

“From what we’ve seen [this year], the Liberty Link® (specifically, LLGT27) and Enlist® soybean systems are working really well for weed control,” said Carlson. “We’ve seen good weed control and little to no crop response” with these systems, especially for controlling waterhemp and giant ragweed, when compared to the Roundup Ready® (RR) system.

As applicators finish the rest of soybean clean up (post-emerge applications following pre-emerge), “the last thing we want to do is ‘beat them up’ when the plants are in flower,” said Carlson, referring to the poor crop response in the RR system. The Liberty and Enlist systems avoid that issue.

This season has seen environmental challenges during herbicide application; in particular, low humidity and high temps. That combination makes the herbicide spray dry too fast and the herbicide doesn’t get absorbed into the targeted weed. “It’s nothing we can control,” said Carlson, “but just like clockwork, as soon as the humidity dropped, chemical performance dropped, too.”

The takeaway is that although environment is uncontrollable, it’s important to address. “Be informed . . . be cognizant of the problem,” he said. Remember, too, that the choice of adjuvant system makes a big difference. “The adjuvant is not a silver bullet,” he said, “but it can make or break the application.”

Choosing a product with increased versatility – with modes of action other than glyphosate –  improves the likelihood of controlling the tough weeds.

“It’s crunch time now,” said Carlson, as everyone tries to finish herbicide applications before labeled use expires, and the RR system can cause frustration when waterhemp and/or giant ragweed are in the picture. “Those two weeds are driving the market for traits,” said Carlson.

Talk to your Federated Agronomist about this year’s weed struggles and how to address those issues in 2021.