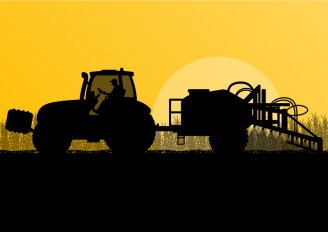 The focus of pre-emerge applications is on problematic weeds, resistance management, and sustainability. “We only have to control one growing point with a pre-emerge herbicide,” said Carlson. “It’s easiest to control weeds as they emerge.”

Pre-emerge followed by post-emerge addresses the “predicament” of weed resistance, and “when we don’t offer early weed control we are at risk of losing yield potential in both corn and soybeans,” said Carlson.

On corn, “early application is anywhere from preplant to pre-emerge through to 2-3 leaf corn. We can do a very good job controlling weeds that early in corn,” Carlson said, noting these products (among others) recommended by Federated: Palace®, Halex GT®, and Staunch™.

On soybeans, “we minimally need a two-pass system, starting with pre-emerge with at least one post-emerge – if you want clean fields with good weed resistance management,” said Carlson. “The days of a one-pass post-emerge program are gone, thanks to weed resistance.”

Weed management in soybeans needs to be designed around the problematic weed(s). For both waterhemp and giant ragweed, two passes are the minimum.  Of course, "it depends on the weed pressure, the weed spectrum, and the weather,” said Carlson, and three passes may be required to make everything work right.”

Post-Emerge, which is always dependent upon seed traits:

Given the right weather, Federated aims to schedule custom applications in this order:

“Federated needs to get corn spraying done early so we can get back to the soybean post-emerge applications on time,” said Carlson.

“We are always trying to be proactive in managing our custom application services,” he said, "and when growers work with us to make that happen, application services are done in a more timely fashion – and we protect yield potential in both corn and soybeans.”

Contact your Federated Agronomist about weed control options and custom application services before the spring rush.