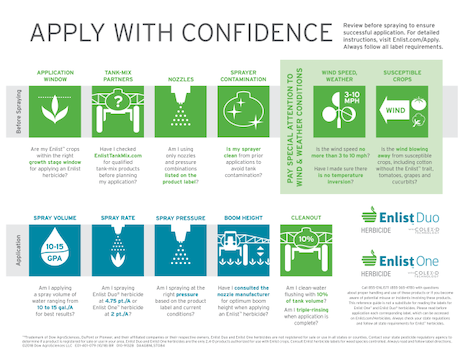 Federated Co-ops recommends the Enlist® system for effective post-emerge weed control. Kevin Carlson, Federated’s agronomy sales manager, said, “We have both Enlist One® as well as Enlist Duo®, which is a premix of Enlist and glyphosate.” See this video from last season.

Tank mix partners are especially important with Enlist products, according to Carlson. “Enlist One has a more robust tank mix partner list,” he said. Enlist Duo’s list is more restrictive. He said, “For example, if you are only after a specific broadleaf weed, such as giant ragweed, either (Enlist One or Enlist Duo) would be effective, but what if waterhemp is also an issue?” You’ll need to consider tank mixing an additional residual herbicide.

Potential tank antagonism is important to consider. “Because the Enlist molecule reduces the efficacy of the post-emerge product, you have to tank mix more of the post-emerge grass herbicide (Volunteer® herbicide, a generic clethodim, for example) to get the same effect,” said Carlson. And, Enlist can also be sensitive to what it is tank mixed with; the goal is to keep it stable.

It may be a “sad reality” to need higher rates of the post-emerge grass herbicide for good control, but as Carlson recalled his first job walking soybean fields – “that job sucked” – the prospect of effective broadleaf and grass control with the right tank mix is very appealing! He added that it’s important to remember how competitive volunteer corn is in soybeans, so treat it when it’s small. (Enlist application guide).

Federated’s custom application guidelines are in keeping with the Enlist labels (including the new supplemental label), and “we reference enlisttankmix.com – from the EPA,” said Carlson. The Enlist tank mix website was created when the products were first introduced in the ongoing efforts to “control off-target movement [of herbicides],” he said. Fortunately, “there are more and more products being added to the Enlist tank mix list by product – which is a good thing.”

Spring is fast approaching and it’s time to “figure out what you need,” said Carlson. “You might need substitutions. We can get the weeds controlled, but it might be with a different herbicide or tank mix than you’ve used before,” he said.

“There are some supply challenges, and prices are up,” Carlson said, “but these are action items your Federated Agronomy team is working through. We have the services to go with the products you get as well.”