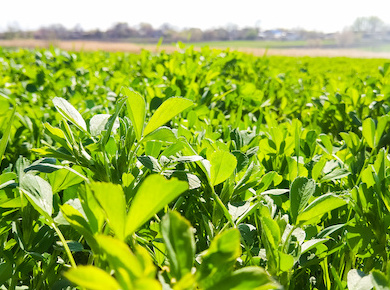 “Everyone knows: In life, whatever you put in is what you get back out,” said Mike Slater, Federated agronomy sales rep serving the Isanti and Osceola locations.

“Well,” he said, “the same goes with a hay crop. Hay is one of those crops that the more you put into it the better the return will be, even grass hay.”

In a year where fertilizer prices are high, there’s a tendency to waffle on fertilizing hay and/or grass hay. But it’s truly a time to stand firm – and place the fertilizer order.

Even during last year’s drought, Slater noted, hay crops that had been fertilized right after the first crop “seemed to jump right off to a good start … when it finally started to rain last fall.” The crops that hadn’t received that boost of nutrients “lagged behind while the plants scavenged for what was left of nutrients out there.”

“Hay removes more nutrients from the soil than a 200-bushel corn crop,” said Slater. One, two, three cuttings – they all mine the soil.

To maximize tonnage and crop health, fertilizer hay fields in two or three separate applications, between cuttings, spreading out the cost and ensuring the fertilizer is there when it’s needed.

Foliar feeding with a plant growth regulator, such as Triad™, or a micropack, such as VersaMax™AC, is also valuable on alfalfa or alfalfa/grass mixes. “We’ve seen great results in overall plant health and yield,” Slater said. And these applications can piggyback on insecticide applications for a “free trip across the field.” Read more about biostimulants.

Talk to your local Federated Agronomist to determine your best fertilizer options on your hay fields this year. And watch for results from Federated’s 2022 small-scale trials of Envita, a nitrogen fixing product.