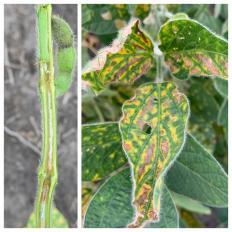 Cool, wet weather this spring could trigger a soil borne fungus that causes brown stem rot (BSR); the fungus infects soybean plant roots early in the season and then thrives again on dry weather during pod fill in August.

BSR is widespread across the northern U.S. and is sometimes confused with sudden death syndrome or stress due to drought. It can even be misconstrued as plants reaching maturity later in the season – but yield reductions tell otherwise, according to Craig Peterson, Federated agronomist at the Ogilvie location.

Crop rotation is the first defense against BSR. Rotating to corn, wheat, or another non-host crop for two or three years can help reduce BSR fungus to a manageable level.

Conventional tillage can also help curb BSR by burying crop residue – where the fungus survives – and helping with fungus decomposition.

Peterson noted that fields with low levels of phosphorous, potassium, and pH below 6.5 are at higher risk of developing BSR, according to Wisconsin research. A neutral pH level (closer to 7) can help mitigate risk.

To diagnose BSR, split open the soybean plant stem. “With BSR, the pith will be discolored a brown color, especially in the lower part of the stem,” said Peterson. “A healthy stem is a nice white color [inside].” BSR indicators also appear on leaves (see photo), but the inner stem discoloration proves the diagnosis.

Talk to your Federated Agronomist with any concerns about BSR.