CRAIG GUSTAFSON CONCLUDES AGRONOMY CAREER WITH MANY THANKS 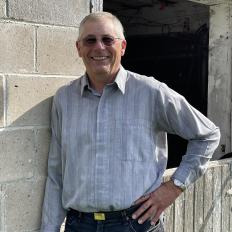 It’s hard to put a cap on a 44-year ag career that began with pumping gas at the co-op’s full-service gas station. But that’s what Craig Gustafson will do when he retires from his role as Federated’s Vice President of Agronomy at the end of October, capping off a great run in the agriculture business.

Gustafson has been part of the Federated Co-op system since before it existed in its current form. He pumped gas, washed windshields, checked oil, and put air in tires for Polk County Co-op, which eventually got bought out by Chisago County Co-op, which later merged with co-ops in Princeton and Cambridge in 1990 – and that group later merged with multiple co-ops to become Federated Co-ops, Inc., in 2000.

There’s much more to those merger stories, but Gustafson said, “I learned a lot about mergers” in all the meetings preceding them. And through those mergers, he moved from the gas pump to selling livestock feed to working as a certified agronomist to leading Federated’s agronomy team from several positions.

He learned a lot about agriculture along the way, especially from the growers he served. “My best education was working directly with farmers … there’s no better education system in the world than working with a farmer,” Gustafson said. His final recommendation to Federated’s growers: “Keep working with your co-op. Federated is a very strong company, and the co-op has invested wisely to keep serving agronomy customers into the future.”

Gustafson himself made large investments of time and energy to build a strong Federated agronomy team. Mike McMahon, Federated’s CEO, mused that the sign of great leaders is whether they leave a place in a better place than when they arrived, and “Craig without a doubt did! Craig’s focus has always been on the patrons, the co-op, and the employees,” said McMahon.

Craig Gustafson is “the best in the business . . . he has been a great mentor to many and he developed the next generation of leaders,” said McMahon, adding that “the team at Federated will miss his leadership, but we will miss his smile and positive attitude more.”

Gustafson observed that it’s hard to know how to instill in his team the summation of his decades of experience. Yet, he knows that the next generation is well equipped. “They have better tools than anything we had [early on] to figure out what we should do,” he said, adding that “the technology, the mapping capabilities, the ability to make good decisions using the information placed in front of them” is far greater today than in years past.

He shared a perfect example of the technological changes during his long career: the “big green book” (the annual CDMS label book). That heavyweight book has gone by the wayside in favor of online apps that provide labeling and other agronomic information with a few clicks. “You still have to make sure the information that you resource is good information – that could be the big challenge for the future – to make sure your information is correct and not trust just one source,” he said.

In his more than four decades in agriculture, Gustafson met more than a few challenges, and the cyclical nature of agriculture was among the most trying. “You see very good, strong years, and you see very thin-margin years,” he said, “and those trends repeat themselves year after year.”

“There have been challenges all the way through, but the current-day challenge is resourcing people who want to work in agriculture,” he said. “It’s like finding good doctors and nurses to work in healthcare. We need to find people who are trained, well informed, and have a passion for agriculture to do the things we do. It’s a big time commitment, too,” said Gustafson.

Gustafson anticipates that Federated Co-ops will see even more changes and challenges in years to come but its financial strength will keep it on course. From a farming standpoint, Gustafson predicts more farm mergers and the growth of family (as opposed to “corporate owned”) farms. Technology, equipment, knowledge, and multiple generations working together will make the family farms bigger. “I’m a family farm managing 300 acres, but there are other family farms over 3000 acres – and they are still family farms.”

As he says goodbye to the long hours and demands of agriculture on the co-op side, Gustafson says he will remain in farming as long as he can (plus, he will continue to be a Federated Discovery Plot partner). He also wants to spend more time with his grandkids while they are still young.

And, he hopes to do a lot more fishing. “I have a boat in the shed with rivets that are still as shiny as can be from not being in the water. Hopefully, I can scuff up a few rivets now!”

He began his career getting to know his customers at the gas pump, and today Gustafson leaves Federated with a long grower contact list. “I thank them for their loyalty all these years. I loved being able to work with so many fine people over the years.”

Gustafson added, with his familiar chuckle, “If I don’t see you in the future, I’ll see you in the pasture!” (Raising a few beef cattle is a very definite retirement option.)

“I can’t thank Craig enough for all he has done. I’m so glad our paths crossed,” said McMahon, and the entire Federated Agronomy Team feels likewise. There’s no doubt he’s earned his retirement. Everyone wishes Craig Gustafson a very happy retirement, with much thanks for a job well done!