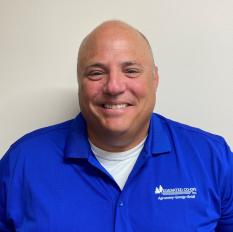 Meet the New Director of Agronomy

Federated Co-ops, Inc. followed through on succession plans with the recent hiring of Scott Nelson as the new director of agronomy. Nelson said he “has big shoes to fill” as he takes on the director’s role relinquished by Craig Gustafson in 2020. As Federated’s vice president of agronomy operations, Gustafson is set to retire in mid-2022.

Nelson hails from Delano and comes to Federated after 10 years in agronomy management at central Minnesota’s Mid-County Co-op. In the draw to this new position, Nelson found Federated to be “a really healthy company,” adding that “all the leadership people were impressive [during the hiring process].” He knew Federated as a “well-run operation” that he wanted to be part of.

Though he gained his earliest agronomy experience working on his neighbor’s farm, Nelson spent a decade as the director of operations for an underground line locating business. His three-state territory at that company prepared him to handle the large geography Federated covers.

Across that entire landscape, “customers expect a pretty high level of service [from Federated] and we want to keep that going,” he said, and the “challenge of an ever-changing business” motivates him. “It can be real fast paced, and I like that … you’re never going to get bored at any level,” he said.

Nelson said he is “impressed by what [Craig Gustafson] does and how he does it.” With the relative quickness of the hiring process – Federated was prepared for it to take 8-10 months to fill the position – Nelson has “lots of time to do a good, solid transition between Craig and myself.” He emphasized that “it takes months and months to do it right.”

Coming in where Craig left off (in the role of director); Nelson said he has “a much different perspective,” since he hasn’t been here “forever.” Nelson is able to see things through a new lens and can ask questions others might not even think of. “Asking whywe do something can get you a long way,” he said.

Nelson’s responsibilities in the early stages of his new role focus on the implementation of a new software system that will be a “game changer in our operations,” he said. Once that system is in place, growers will benefit from Federated’s improved capabilities to make fertilizer, chemistry, and VRT recommendations. Federated is working towards a “seamless transition, replacing current systems” to benefit both growers and agronomists.

Along with hunting and fishing, Nelson enjoys planning trips or outings with his wife, adult children, and his 13-month-old grandson.

Federated welcomes Scott Nelson to the agronomy team! If you didn’t get to meet him at Discovery Plot Days, you can find him at the main office in Princeton.