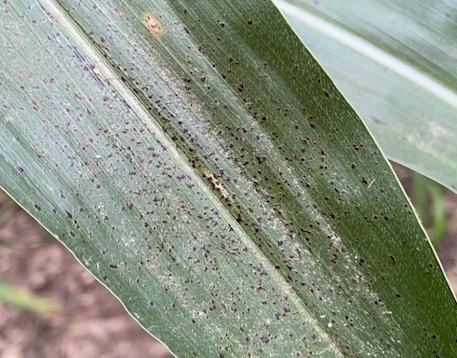 Tar spot, caused by the fungus Phyllachora Maydis, is unfortunately making its way to corn fields in Minnesota and western Wisconsin. The fungus creates stromata that look like raised black “tar” spots (1/16’ to-3/4” in diameter) appearing on the corn leaves (as shown in this photo taken in southeastern Minnesota last week).

The disease favors cooler temperatures and wet environments. Once tar spot shows up in a field, “it can spread fast by wind and rain, and it has been known to overwinter in Minnesota,” said Mike Slater, Federated ag sales rep for the Isanti and Osceola locations.

Tar spot – which can cause 50 bu./ac. losses if left untreated – has been found in a few counties north of the Twin Cities so far, in Kanabec, Anoka, and Washington counties. “It is still new to our area,” he said, emphasizing that it spreads from one area to the next by wind and rain.

Watch for tar spot in your corn fields. If you find it, talk to your Federated Agronomist to get a fungicide applied soon. Federated recommends Miravis® Neo and Trivapro®, among other options.