News > Agronomy News and Events > ‘WEATHER’ OR NOT, WATCH FOR APHIDS AND SPIDER MITES

‘WEATHER’ OR NOT, WATCH FOR APHIDS AND SPIDER MITES 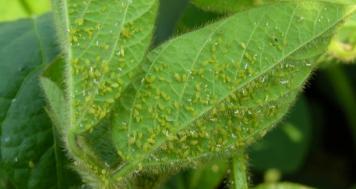 Weather that’s good for one is not-so-good for the other: Drought conditions prevent aphids (photo) from finding enough nitrogen in the soybeans to support themselves, but the two-spotted spider mites like the hot and dry conditions.

However, “aphids may come either way,” said Kevin Carlson, Federated’s agronomy sales manager. “It’s just a matter of whether the conditions are advantageous for the reproduction of the aphid populations.”

Of course, the only way to know if either insect is a problem in your soybean fields is to scout regularly and thoroughly. “It means getting out and walking the fields,” said Tim Stelter, Federated’s Osceola location manager.

Spider mites start on the field edges, and they are “very difficult to scout for at the start,” said Carlson. “As we approach mid-season, and as the grass [on field perimeters] matures and senesces, that’s where the spider mites mature and then move out of the grass into the crop,” he said, where they can cause significant damage to the soybeans.

Knowing when to spray for spider mites or aphids is a bit challenging, and using the right insecticide is critical. “There are very few insecticides that cover both insects in one application,” said Carlson. And choosing the wrong insecticide can cause a flair up of the insect not being targeted with the application.

Apply a product that is both an insecticide and a miticide, such as Brigade™, which contains the active ingredient bifenthrin. “This year, more than others, it’s all about supply,” said Stelter, so “take whatever [product] you can get,” he added. (“Supply pretty much dictates everything we do” in 2021, he said.)

Stelter emphasized the importance of scouting before and after spraying. “They are hard to kill,” he said, which is especially true of spider mites, since miticides don’t kill the eggs –another generation of spider mites. The higher rate of bifenthrin offers more residual, which can help control hatching insects.

Aphids, on the other hand, can reproduce quickly and move between fields, from a field that was sprayed to a field that wasn’t. “You have to be out there looking. You can’t just drive by,” he said.

Timing is important. Spraying too early – before reaching the economic threshold – can kill off beneficial insects. Too late, yields suffer. Once application is often not sufficient, and the second application should include a different active ingredient to help avoid resistance, Stelter noted.

Talk to your Federated Agronomist to discuss your options for controlling yield-robbing insects on your soybean crop.