News > Agronomy News and Events > “ARE WE THERE YET?” 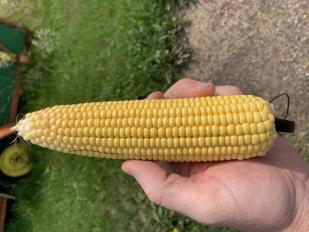 Not unlike the road trip query – “Are we there yet? – growers naturally start asking about corn maturity once the calendar turns to August. With the slew of 90-degree days this summer, growing degree days (GDDs, or GDUs/growing degree units) have been plentiful – though 86 degrees F is the upper limit in the GDU equation because corn development is restricted beyond that temp.

GDU is calculated using the mean daily temperature and subtracting the base temperature for corn growth, which is 50 degrees F:

Don Lamker, Federated agronomy sales rep for Rush City and Ogilvie, said, “GDUs begin at the date of planting. A hybrid may require a total accumulated GDUs of 2450 to reach the dent stage of crop maturity or 2700 accumulated GDUs to reach black layer.”

Time to corn maturity is part genetics, but “can also be impacted by environmental conditions; diseases, nutrient deficiencies, drought, and frost can shorten the time required to reach physiological maturity,” said Lamker.

The black layer stage indicates corn’s physiological maturity. Lamker said, “Black layer indicates the kernel has reached its maximum dry weight and is no longer receiving water or nutrients from the plant. It stops filling. The black layer forms at the tip of the kernel where it attaches to the cob.  At black layer corn is usually at about 30% moisture.”

To check maturity at this point in the season, according to Lamker, keep an eye on the milk line, the line that separates the starchy area from the milky endosperm of the corn kernel; it will move from the crown of the kernel to where it attaches to the cob. “An ear with most kernels at half milk line will be about two weeks from black layer,” he said.

The chart below offers helpful information on corn maturity. Your Federated Agronomist is a great resource for questions on crop maturity overall.  The videos below look at corn (and soybean) maturity in one of Federated's service areas last week.